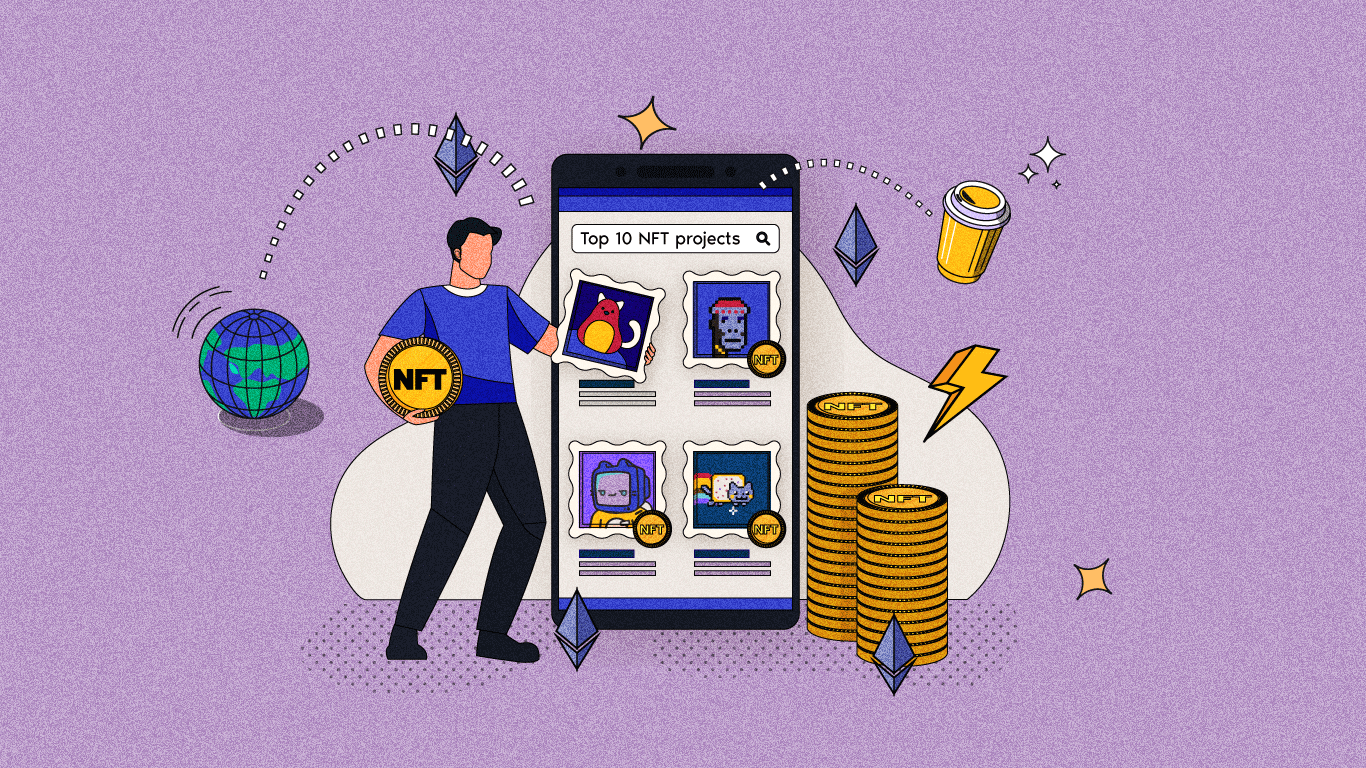 Once a niche interest, Non-Fungible Tokens (NFTs) are now a crucial part of the Web3 framework and a respected asset class like cryptocurrencies. We now have global NFT indices, high-profile projects on numerous blockchains, and massive organizations entering the world of Web3 through NFTs!

The NFT market is projected to reach the value of $200 billion by 2030; far off its estimated $15 Billion value in July 2022. The growth to this point has been fueled by successful projects, which have not only amassed millions in sales, but also expanded the use case for NFTs and inspired a lot of healthy competition.

These are some essential NFT projects you should know about:

Since its launch in April 2021, the Bored Ape Yacht Club (BAYC) has become the modern posterboy for success in the NFT space. Created by Yuga labs, it was launched as a collection of 10,000 unique NFT avatars on the Ethereum Blockchain.

It garnered a huge pop culture following, as collectors include celebrities like Madonna, Snoop Dogg, Justin Bieber, Eminem and more. These avatars have been featured in music videos and could have their own feature film as well.

BAYC is one of the only collectibles projects that successfully spawned off a token and metaverse. As of the time of writing, it has the all-time 2nd highest sales volume for an NFT Collection - standing at $2.3 billion in sales. How’s that for some apes! 🙊🐒🦧🐵

Otherdeeds are the main NFT offering of Otherside, a metaverse created for owners of the Bored Apes mentioned above.

Launched on April 30th 2022, Otherside is an NFT game and metaverse project that was created by Yuga Labs, the founders of the BAYC. Up to 10,000 holders of Bored Apes and other NFT collections will be able to enter this Multiplayer Online Role-playing Game (MMORPG).

Otherdeeds are NFT packages containing land and other virtual resources to be used in the metaverse. Depending on the rarity, Otherdeeds contain elements such as ore, stone, land or a Koda; mythical creatures in this metaverse.

Out of the 100,000 Otherdeeds in existence, 45,000 have been reserved for owners of Bored Apes as well as the staff and partners of Yuga Labs. The rest were sold out within minutes in dramatic circumstances.

The game involves collecting and breeding Axies, which are axolotl-inspired digital pets that can battle with each other or trade to earn tokens. These Axies are Ethereum-based NFTs and form the basis of the game.

The project has been a key driver of the GameFi explosion and inspired numerous successful play-to-earn titles. It has the distinction of having the highest transaction volume of any NFT project ever, with over $4 billion in sales.

Cryptopunks is a collection of 10,000 collectible characters on the Ethereum blockchain that was launched in June 2017. Each CryptoPunk is a punk-themed 8-bit character with unique attributes and characteristics which determines its value.

The collection was inspired by the London punk scenes, the cyberpunk movement, and the legendary EDM group Daft Punk. The project was an inspiration for the ERC-721 standard for NFTs, a standard that has become popular with cryptocurrencies and Defi on multiple blockchains.

At the time of writing, CryptoPunks has the third highest all-time sales volume for an NFT project. This reflects its popularity and status as a critical driver for NFT adoption.

Art Blocks is an NFT project in which an algorithm generates original artworks on the Ethereum blockchain.

Launched in November 2020, users of the platform get unique NFT drops. The art is generated and minted as an NFT on the spot, but users have no idea what type of NFT art they’ll receive. As a result, the look and feel of each piece of art from the platform are unique and varies greatly.

The product has garnered more than $1.2 billion worth of trading volume so far in its existence.

Made by our sister brand RBL Labs, LegendsOfCrypto is an NFT card game that is a tribute to the figures who helped bring the crypto revolution to life!

The game features NFT cards inspired by popular figures such as meme coiners, mo coiners, yield farmers, and many other characters relatable to anyone in the crypto space. Fifteen of these unique cards are required to play the exciting game, which is simple to learn but addictive and notoriously hard to master!

The main NFT offerings of this project are the Genesis Collection and the Apollo Collection of NFT cards. The Genesis collection was sold out shortly after its launch, but the Apollo collection remains available for sale. These cards can be traded like regular NFTs or simply used to enjoy the game!

NBA Top Shot is an NFT marketplace that enables fans or investors to buy, sell or trade NBA video clips.

Launched in 2020, it was designed to combine an experience similar to collecting traditional sports trading cards with blockchain technology. The platform is run using the Flow blockchain, built by Dapper Labs’ Flow blockchain.

The collection was created by airdropping 10,000 Mutant Serums to every Bored Ape holder. The mutants were then produced by exposing their Bored Apes to the Serum, which came in M1, M2, or M3 variants.

The Sandbox is one of the most widely adopted metaverses on the Ethereum Blockchain. The project is basically a virtual world where players can build, own, and monetize their immersive gaming experiences.

It features a free game maker, NFT marketplace, and VoxEdit, a free 3D voxel modeling and NFT creation, amongst other features. Players are able to make money from the platform by creating and selling NFT assets, building and monetizing games, and acquiring virtual land which can be sold or traded.

Ethereum Name Service (ENS) was launched to manage the issuance and renewal of Ethereum-based domains. These .eth domains are minted as NFTs which can be bought, sold, or traded.

These domains serve the additional utility of directly linking to a crypto wallet. Transactions can be carried out using a .eth domain instead of a long ethereum address which has 40 characters.

Just like the web domain craze of the early internet, ENS names have generated a lot of interest amongst those who’re looking to get valuable domain names early to either turn in a profit or score bragging rights.

There are numerous awesome NFT projects out there that couldn’t make this list. Here are some honourable mentions:

Keywords:
#NFTs #Metaverse #GameFi #investment
Tell me more...
What is GameFi?
How to Buy Land in the Metaverse
NFTs, Explained
The Metaverse, Explained
Related Articles
No items found.
No items found.
Join Our Newsletters
Sign up to our newsletters and be the first to know about the latest insights on the crypto ecosystem!
Subscribe