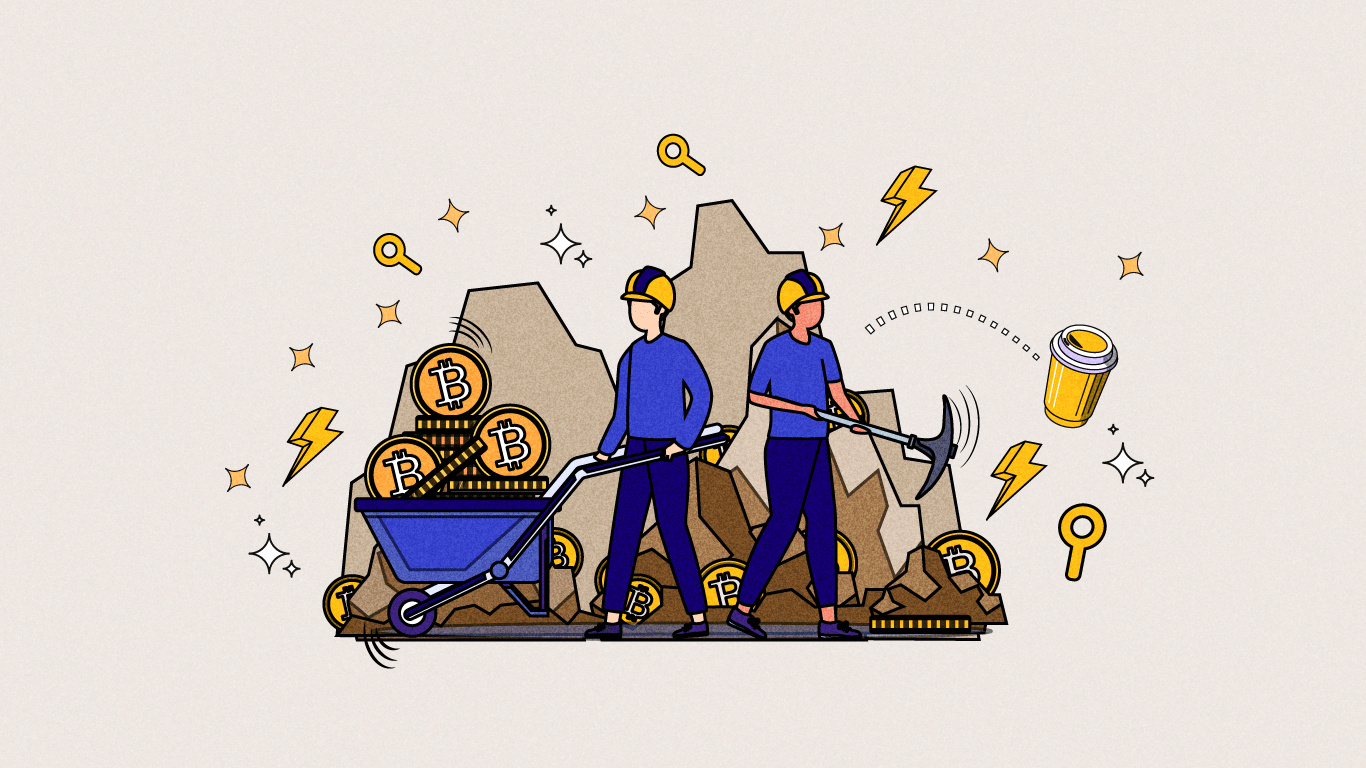 What is cryptocurrency mining?

What is Cryptocurrency Mining?

Blockchains are public digital records and can be easily manipulated. Therefore, to maintain the integrity of the network, miners pool their resources to ensure the validity of all transactions recorded on the blockchain. Their activities keep the network secured, and in return, the miners are rewarded with newly minted coins and transaction fees.

How does cryptocurrency mining work?

To explain how mining works, let’s use bitcoin as an example.

Mining new bitcoins, miners use their computers to solve complex mathematical puzzles. This means all the computers on the network compete with each other to be the first to guess a 64-digit hexadecimal number called ‘the hash.’ The first computer to make a correct guess gets the reward.

Let’s get technical a bit.

For example, you successfully sent a friend 1BTC, and the transaction is recorded on the blockchain. To validate the transaction, a miner passes the record through a hashing function to generate a hash which now contains all the information within your transaction but is represented as a 64 hexadecimal digit.

After hashing all the individual transactions, the hashes are organized into pairs and re-hashed to generate a new hash. The new hash outputs are again paired and re-hashed. This process is repeated until a single hash is created. This last hash is called the root hash or the Merkle root.

Miners repeat this complex process until a valid hash is found, and when it is created, the miner broadcasts his block to the entire network where other nodes also check to verify the validity of the hash before adding the new block to the copy of their blockchain. At the point of confirmation, miners move on to mining the next block.

Why is crypto mining important?

Mining is the way to release new crypto coins into circulation, but even more importantly, mining is crucial to keeping a blockchain secured and decentralized, because the elaborate peer-to-peer network of miners removes the need for a central regulating body.

There are various methods of mining, and they all require different amounts of time.

Since 2019, the process of cryptocurrency mining has become more complex. It currently requires more computers with higher computing powers. This makes mining expensive for individual miners. To address this, large companies now operate mining farms where they provide the hardware and electricity required to mine profitably, and the reward received is shared amongst the participating miners.

Environmental activists have raised concerns about the environmental impact of cryptocurrency mining. Proof of work cryptocurrencies like bitcoin and Ethereum currently consume up to 150 terawatt hours of electricity annually. This is more energy than entire countries like Argentina use. It is believed that that much energy consumption emits some 65 megatons of carbon dioxide into the atmosphere annually. This makes proof-of-work cryptocurrency a major contributor to global air pollution and climate change. Crypto enthusiasts, however, argue that this is an opportunity to ramp up the development of renewable energy technologies.

Cryptocurrency mining - is it worth it?

Well, this depends on how many resources you can afford. As mining difficulty increases, it has become harder to mine profitably, unlike in the early days when you could set up your computer and mine from home. To begin, you need to consider the method of mining, the prices of the infrastructure you need, electricity consumption, cost of electricity and cooling. If these are too much for you, you can always join a mining pool.